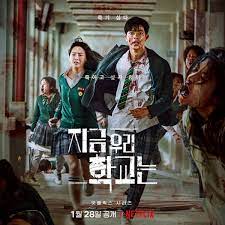 All of Us Are Dead is a South Korean, coming-of-age, zombie Netflix series. Students of Hyosan High School try to escape after it quickly becomes ground zero for a zombie virus. Nam On-jo, played by Park Ji-oo, and her friends try to survive their new normal.

Hyosan High’s science teacher, Lee Byeong-chan (Kim Byung-chul), creates the Jonas Virus and injects it into his son in order to help him stick up to his bullies. The virus turns the host into a lifeless husk that feeds on humans; basically zombies.

The first episode starts off with a brutal bullying scene on a rooftop. Lee Jin-su (Lee Min-goo) gets attacked by a group of bullies and thrown off, barely alive. Coincidentally, the victim’s dad turns out to be Byeong-chan. After being taken to the hospital, Byeong-chan sneaks into his son’s room. Min-goo apologizes and says that he is going to kill them all. Min-goo begins to turn, and Byeong-chan hits him over the head with a bible. Min-goo gets stuffed into a suitcase.

One of Min-goo’s bullies is cleaning the science room when she hears noises from the supply closet. She goes to investigate, but only finds a rodent in a box. She sticks her finger into the box to pet it, but gets bit instead.

Byeong-chan comes into the room to see the student next to the rodent. Panicked, he locks her in the room. The rodent she was bit by was infected by the Jonas Virus. Instead of killing her, Byeong-chan takes this as an opportunity to find a cure.

The infected student breaks out of the storage room. She enters her classroom stumbling, nose covered in blood. She tells her teacher that Byeong-chan locked her up. Her teacher, Lee Su-hyeok (Park Solomon), On-jo, and another student rush her to the nurses office.

The nurse takes her temperature, which was way too low. The student mutters that she is going to kill the science teacher, then bites the nurse while receiving a shot. After the paramedics arrive and she is taken away, the nurse starts to go on a rampage, biting every student in sight.

Normally, I do not like zombie shows or movies because the plot either moves too slow or too fast, uses the same ideas of how zombies should be, or is just too similar to every other zombie flick. However, All of Us Are Dead is not only original, but entertaining.

The series has just the right pace; slow where it needs to be and fast where it needs to be. This show had me on the edge of my seat the entire time. I have never felt so many emotions all at one time. All of Us Are Dead is the perfect mix of suspense, action, sadness, romance, and comedy.

The cast actually acts like how high school students would. Everyone delivered their role very well with lots of emotion. Throughout the episodes, the students learn how unforgiving the world can be, how to act when any moment could be your last, and how to function without an adult during a crisis.

Although there were only 12 episodes, each one felt very fleshed out and not like fillers. There were times where the main group would sit in a room for the whole episode, but there was always something going on. During those times, they would think about their next moves, learn about the characters, and see their relationships grow.

No character was annoying or boring; each had their own personality and thought process. All the characters felt very real and well thought out. The different dynamics each of them had made the show entertaining and flow nicely.

Overall, All of Us Are Dead is an extremely good, binge worthy show with an amazing plot and an even more amazing cast.